A wart is a growth caused by the human papillomavirus (HPV) virus. The term plantar comes from a medical description for the sole. Any wart on the bottom of the foot can be called plantar warts, but many types of warts can affect the feet.

Common warts are flesh-colored or brown, thick and dome-shaped, forming on the non-weight bearing surfaces of the foot.

Flat warts are typically small and slightly raised—flat lesions that occur in a line or cluster on the outside of the foot or the ankle. Periungual warts occur around or under the toenails and are difficult to treat and can be painful.

Mosaic warts appear large but are generally several smaller warts grouped into a cluster or forming a plaque. They tend to grow out with multiple fingerlike projections. They tend to bleed easily and can be dry, cracked, or scaly. Digitate warts are uncommon on the feet but can be found on the toes.

Warts have their own blood and nerve supply. Commonly, pinpoint black areas are visible on the surface of warts. These black dots are the wart’s superficial network of capillaries but may only be visible after the top layer of callus tissue is removed.

A common misconception about plantar warts is that they have roots that can grow deep into the tissues and attach to the bone. This is not true.

A wart only grows in the top layer of skin, and although the wart may extend slightly deeper, this is generally due to the mechanical forces from walking pushing the wart deeper into the tissue. They are flesh-colored or brown, thick and dome-shaped, forming on the non-weight bearing surfaces of the foot.

Warts can look and feel like a callus or corn, and many people with warts complain of feeling like they are walking on a pebble in their shoes. Although many people will never experience much pain with warts, in most cases, they are painful.

In some cases, warts can be very painful. Some feel like they have a piece of glass stuck in their foot, while others feel sharp pain with every step.

The surrounding area can become red and inflamed after extended periods of walking and pressure on the wart. Some warts can become very large and extremely painful, as seen in the image above.

There are several treatments for warts, and the treatments range from duct tape to surgery. The type of treatment depends partly on the size, location, and the number of warts and the patient. When there are multiple warts over the entire sole, it is recommended to try topical and oral medication before considering surgery.

Many people find that home treatments are the most convenient for their schedule. Surgery may be a reasonable first step if there is only one wart. Warts between the toes or under the nail may require different treatment regimens than warts on the sole.

Others are willing to make weekly visits to the doctor’s office for acid treatments, while some people want to have surgery to remove warts.

No Treatment: In children, warts may go away spontaneously. If the wart is not causing any pain, it is reasonable to watch the area initially as the first line of treatment. Make sure the wart is not increasing in size, and make sure it is not spreading.

Warts in children may also go away if you have the child draw a picture of the wart and then bury it in the backyard, burn it in the fireplace or throw it away. The power of suggestion works effectively in children, and the body’s natural immune response may kick in. If the wart does not resolve in 4 weeks, make an appointment with your pediatrician or podiatrist.

Home Remedies for Warts On Your Feet

Although not researched like other wart treatments, many people claim wonders with some simple home treatments. The advantage is that they are cheap, and most do not have side effects.

1. Apple Cider Vinegar: Take a cotton ball and pull off a piece that resembles the size of the wart. Soak it in vinegar, squeeze out the excess, and place it on the wart. Cover the wart with tape and sock before sleep. Use daily for 7-10 days.

2. Potato, garlic, or banana peel: Each involves rubbing the food product on the wart and then covering the wart with a bandaid, tape, or duct tape. The potato wart cure is a folk remedy that developed long ago. It actually involves burying the potato in the backyard after applying it to the foot.

No kidding. For years, this has been the folk remedy, and many people still claim it works. As one would imagine, no study has proven its benefit. But, do not underestimate the power of suggestion.

3. Duct Tape: This is the one home remedy researched quite a bit. When evaluating treatments like the above-mentioned home remedies, researchers noticed something in common: occlusion. The wart is occluded with a bandaid, sports tape, moleskin, or duct tape in each treatment.

In the popular 2002 study on duct tape, researchers found that duct tape was more effective than cryotherapy (freezing warts). Initially, research showed that the therapy seemed somewhat beneficial as long as the wart was occluded. Later, some proposed medicinal benefits of the adhesive have not been proven.

Once the duct tape remedy made the news, it was over-hyped, and the effectiveness was overstated. Recent research has shown no benefit of duct tape over moleskin. The key with most treatments is occlusion.

In the study, participants soaked their feet in warm water and gently rubbed the wart with an emery board for 2 months or until the wart was gone. DO NOT rub aggressively with a pumice stone. This may cause shedding of the virus and, at the same time, cause breaks in the surrounding skin, resulting in further spreading of warts.

4. Over The Counter: Products at the drug store are typically made with salicylic acid and are moderately effective. Salicylic acid is one of the mainstays for treating warts but is generally not sold in high enough concentrations in non-prescription products to be effective.

Most medications require daily application and will take weeks to work if they do work. Although covering the wart and medication with a bandaid or duct tape may increase effectiveness, be careful. The acid can burn the surrounding skin and cause ulceration, resulting in infections. Do Not try these medications if you have diabetes!

5. Soak your feet for 15-20 minutes to soften the skin: Soaking your feet in Epsom salt, tea tree oil, or baking soda softens the rough, hardened skin on your feet. The excessive skin becomes soft hence easier to remove. 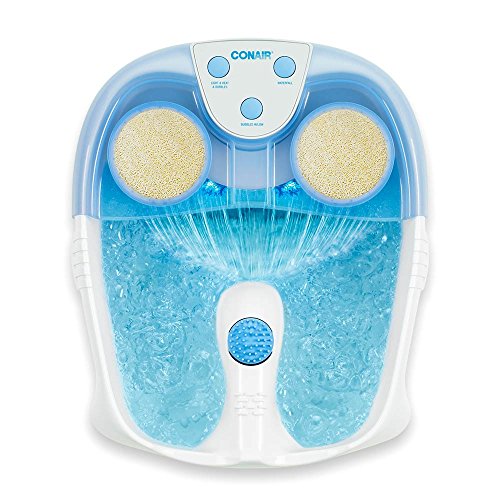 The Conair foot bath comes loaded with plenty of features. One of the outstanding features is the large pumice stone on the spa. It also comes with a scrubbing brush and a soft massager. 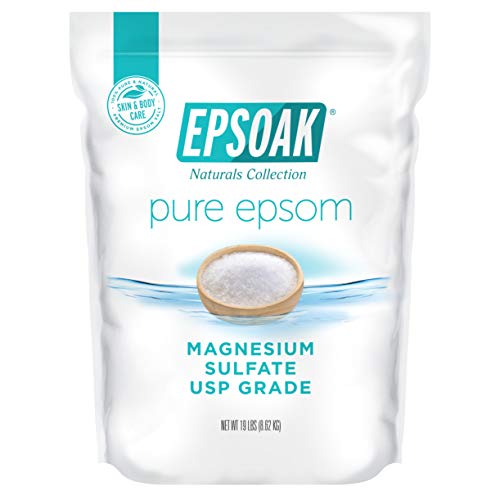 EPSOAK Epsom salt is a top-rated product for exfoliating. After dissolution, this salt relaxes muscles and improves the skin’s condition.

1. Liquid Nitrogen: Also known as freezing or cryotherapy, liquid nitrogen is the most common treatment used by primary care doctors and pediatricians for warts. A blister usually forms after treatment, and although the application is typically not painful, there may be some pain afterward.

2. Salicylic Acid: One of the most commonly used medications to treat warts. It is popular because it is well-tolerated, not painful, and results in little scarring. But, even though it can be effective, the destructive process is slow, and the treatment period is long.

3. Monochloracetic acid/trichloracetic acid: These acids used to be prevalent topical treatments but have lost some favor. Many have found that patients tend to have some inflammation and pain with the treatment.

When used effectively, the area may blister, become red, and need to be drained by the treating doctor. Although the treatment period may be faster than other acids, many find the weekly treatments uncomfortable.

4. Cantharidin: A popular treatment for warts as the prescription name Canthacur® (also includes podophyllin and salicylic acid), this tends to be effective and well-tolerated. Treatments are usually 1-2 per week after reducing excess callus tissue. The FDA does not approve this for the treatment of warts.

5. Imiquimod: Also known as Aldara®, this wart medication is approved for treating genital warts, but research has shown it to be effective for plantar warts. This prescription immunotherapy medication encourages your body to release the immune system to fight off warts. This is a medication used at home every other day.

6. Oral Medication: Only a couple of oral medications have been used to treat warts, and their effectiveness is controversial.

It should not be the first line of therapy. You can try other forms of therapy. The warts are injected with different agents to stimulate your body’s immune response.

a. Cimetidine: Commonly known for its use in reducing stomach acid, research has shown that cimetidine can also be effective in treating warts. The dosage ranges from 20 mg to 30 mg/kg daily in divided doses. Cimetidine seems to work best in patients under 17 but may need to be taken 2-4 months. Discuss the treatment with your doctor.
b. Vitamin A: Can be used as topical therapy or taken orally. Dosages vary, and long-term high dose vitamin A can be toxic.

8. Surgery: Removing the wart surgically may seem to be the quickest way to cure it. Warts are typically removed by blunt dissection, but some doctors will use a laser. Laser excision is not necessarily more effective.

The recurrence rate tends to be just as high after blunt dissection, laser surgery, or topical treatment. Depending on the number of warts and size, the surgery may be painful afterward. Patients are generally limited to minimally walking with a surgical shoe for about 10 days and some discomfort for 2-3 weeks.

For solitary warts, this may be the best treatment option. Scar tissue is a possible complication, and as with all surgeries, infection is possible.

Considering the varying types and locations of warts, treatments will vary from patient to patient. Before seeking treatment in the doctor’s office, there is no harm in trying over the counter or home remedies (as long as you do not have diabetes).

It is recommended to start with conservative therapy before considering immunotherapy or surgery. Your doctor may want to biopsy the wart if it appears unusual or is not responsive to treatment. Some warts may develop into cancer, or cancer may appear like a wart.

This is uncommon, and it is not recommended or necessary to biopsy every wart. There is always a chance for recurrence, no matter which treatment you have had.